Welcome to THE MAKING OF A NATION -- American history in VOA Special English. In the late eighteen hundreds, white Americans expanded their settlements in the western part of the country. They claimed land traditionally used by American Indians. The Indians were hunters, and they struggled to keep control of their hunting lands. The federal government supported the settlers' clhoaims. It fought, and won, several wars with Indian tribes. It forced the Indians to live on government-controlled reservations. This week in our series, Larry West and Steve Ember tell about the people who settled on the old Indian lands after the wars. After the Indians were defeated, thousands of settlers hurried west. Some hoped to find new, rich farmland. The soil they left behind was thin and overworked. Their crops were poor. Some simply hoped to buy any kind of farmland. They did not have enough money to buy farmland in the east. Others came from other countries and hoped to build new lives in the United States.
All the settlers found it easy to get land in the West. In eighteen sixty-two, Congress had passed the Homestead Act. This law gave every citizen, and every foreigner who asked for citizenship, the right to claim government land. The law said each man could have sixty-five hectares. If he built a home on the land, and farmed it for five years, it would be his. He paid just ten dollars to record the deal. Claiming land on the Great Plains was easy. Building a farm there and working it was not so easy. The wide flat grasslands seemed strange to men who had lived among the hills and forests of the east. Here there were few hills or trees. Without trees, settlers had no wood to build houses. Some built houses partly underground. Others built houses from blocks of earth cut out of the grassland. These houses were dark and dirty. They leaked and became muddy when it rained. There were no fences on the Great Plains. So it was hard to keep animals away from crops. Settlers in the American west also had a problem faced by many people in the world today. They had little fuel for heating and cooking. With few trees to cut for fuel, they collected whatever they could find. Small woody plants. Dried grass. Cattle and buffalo wastes. Water was hard to find, too. And although the land seemed rich, it was difficult to prepare for planting. The grass roots were thick and strong. They did not break apart easily. The weather also was a problem. Sometimes months would pass without rain, and the crops would die. Winters were bitterly cold. Most of the settlers, however, were strong people. They did not expect an easy life. And as time passed, they found solutions to most of the problems of farming on the Great Plains. Railroads were built across the west. They brought wood for homes. Wood and coal for fuel. 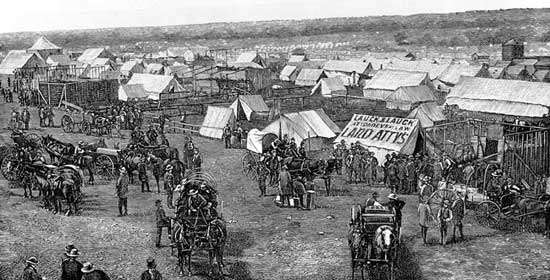 Technology solved many of the problems. New equipment was invented for digging deep wells. Better pumps were built to raise the water to the surface. Some of the pumps used windmills for power. The fence problem was solved in eighteen seventy-four. That was the year "barbed wire" was invented. The sharp metal barbs tore the skin of the men who stretched it along fence tops. But they prevented cattle from pushing over the fences and destroying crops. New farm equipment was invented. This included a plow that could break up the grassland of the plains. And farmers learned techniques for farming indry weather. Most of the problems on the plains could be solved. But solving them cost money. A farmer could get wood to build his house. But he had to buy the wood and pay the railroad to bring it west. To farm the plains, he needed barbed wire for fences, and plows and other new equipment. All these things cost money. So a plains farmer had to grow crops that were in big demand. He usually put all his efforts into producing just one or two crops. The farmers of the plains did well at first. There was enough rain. Huge crops of wheat and corn were produced. Much of the grain was sold in Europe and farmers got good prices.
The farmers, however, were not satisfied. They were angry about several things. One was the high cost of sending their crops to market. The only way to transport their grain was by railroad. And railroad prices were very high for farm products--higher than for anything else. The railroads also owned the big buildings where grain was stored. Farmers had to pay to keep their grain there until it was sold. They said storage costs were too high. The farmers were angry about the high cost of borrowing money, too. They opposed the import taxes -- tariffs -- they had to pay on foreign products. Some of the tariffs were as high as sixty percent. Congress had set the levels high to protect American industry from foreign competition. But farmers said they were the victims of this policy, because it increased their costs. Farmers as individuals could do nothing to change the situation. But if they united in a group, they thought, perhaps they could influence government policy. Farmers began to unite in local social and cultural groups called "granges." As more and more farmers joined granges, the groups began to act on economic problems.
Farmers organized cooperatives to buy equipment and supplies in large amounts directly from factories. The cost of goods was lower when bought in large amounts. The granges also began to organize for political action. Local granges became part of the national grange movement. Grange supporters won control of state legislatures in a number of middle western states. They passed laws to limit the cost of railroad transportation and crop storage. Railroads refused to obey these laws. They fought the measures in the courts. They did not win. Finally, they appealed to the United States Supreme Court. The railroads said the laws were not constitutional, because they interfered with the right of Congress to control trade between the states. The railroads said states could not control transportation costs. To do so would reduce profits for the railroad. And that would be the same as taking property from the railroad without legal approval. The Supreme Court rejected this argument. In a decision in eighteen seventy-six, the Supreme Court said states had a legal right to control costs of railroad transportation. It said owners of property in which the public has an interest must accept public control for the common good. The farmers seemed to have won. But the powerful railroad companies continued to struggle against controls. They reduced some transportation costs, but only after long court fights. The granges tried to get Congress to pass laws giving the federal government power to control the railroads. Congress refused to act. Many farmers lost hope that the granges could force the railroads to make any real cuts in their costs. They began to leave the organization. Others left because the economy had improved. They no longer felt a need to protest. Within a few years, the national grange had lost most of its members. Some local groups continued to meet. But they took no part in politics. New protests groups would be formed in a few years when farmers once again faced hard times. But for now -- in the late eighteen seventies -- times were good. Most people were satisfied. We will continue this story next week.