So, this week marks the 75th anniversary of Operation Dragoon often called the forgotten invasion of World War II. The mission was intended to coincide with D-Day but it got delayed due to lack of resources. About two months later, 350,000 French and American troops landed on the French Riviera, ultimately joining forces with Operation Overlord and helping to liberate most of Southern France in only four weeks. My next guest was part of that mission, flying into Nazi occupied land in a daring daylight jump in August of 1944. And he has an incredible story about making it out alive. World War II paratrooper Roland Barhyte joins me now. He also served in the Battle of the Bulge as a member of the 551st parachute infantry battalion. Roland, thank you for being here with me tonight. 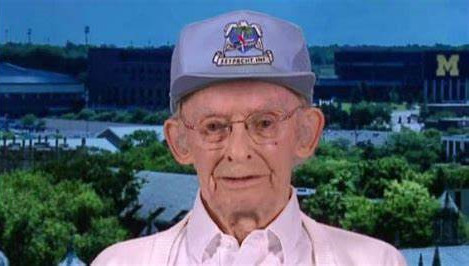 Tell me a little bit about that mission and what it was like when you landed in the middle of the day there. It was kind of surprising in that we were one of the few to make daylight jumps. Most paratroop drops were done in darkness before a dawn if possible. It was our actual jump and landing and assembling on the ground was rather uneventful because there were no enemy troops that are firing at us. Thank goodness. Thank goodness. So, you know, you say that the first time you ever flew in an airplane you jumped out of it. Why did you volunteer to be a paratrooper? Because I was wondering if I could deal with jumping out of an airplane. But I had been afraid of heights before that. But it's different jumping out of an airplane. When you are standing on something solid that is attached to the surface that you are headed for, it's different. Up in the air there is just space. It seems. And you go out and it's kind of great.